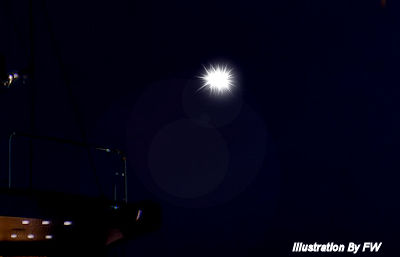 Date: 21st Nov 1990 (the day before Thanksgiving which is why I could remember on how to confirm the date)

Time: from about 6.30pm local time

I was crew on a private sailing yacht anchored in Great Bay in the area where the cruise ship terminal is now. We were there to pick up the American owner and family who were flying into the island that evening. I was working on deck finishing preparations for his arrival. The stewardess had come up from down below and suddenly said “my god, what on earth is that?”

I looked up (to the east) to where she was pointing and saw a light in the sky. It didn’t have the precise definition of an aircraft navigation light but had a vague ‘fuzzy’ edge to it. The colour was changing and merging from shades of gold to green to red and white and perhaps pulsing slightly.

The first thing that struck me about the object was the way in which it moved. It was constantly moving slowly around but in a most irregular manner. Sometimes it moved one way for several seconds but soon changed course, it sometimes moved more upwards, sometimes more downwards. Occasionally it headed on more of a steady course but was still continually weaving and ‘bobbling’ as it did so. On at least two occasions it did stop but then immediately changed to a bizarre motion of that of a falling leaf. It would ‘flutter’ down some height and then resume its random flight pattern again.

After maybe 15 minutes it disappeared behind one of the large hills to the east. I was very disappointed at this stage to see it go. I kept looking up from my work and maybe about 20 minutes later there it was again in the same area of the sky. Again it followed the same irregular motion. I had to keep working but kept checking to see if it was still around, after maybe 6 or 7 minutes it was there no more and I didn’t see it again.

The owner and family came on board maybe be an hour later. Soon afterwards there was a call on the VHF radio distress frequency (channel 16 which is always left on) from the coastguard. (I think it was probably an American coastguard ship as the accent was American – the island is half Dutch, half French).

They were asking if anybody had seen an aircraft crash into the sea as this had been reported to them earlier that evening. I think we reported back we had seen a light moving erratically but nothing hitting the sea. We then left the bay and spent the next few days moored at Saint Barthelemy, the first island to the south east. I checked the newspapers there for two or three days afterwards but there was no report of any aircraft crashing or going missing.

The object was never that far away form us. Measuring from the map below I would say it was between just over half a kilometer and two and a half kilometers away. The object was never above the height of the large hill (200m) as the hills were silhouetted behind it as we watched it. At no time was there any noise from the object at all. It was a typically fine Caribbean evening, a light wind, clear skies and probably the occasional cumulus cloud. I didn’t see or hear any other aircraft at the time. 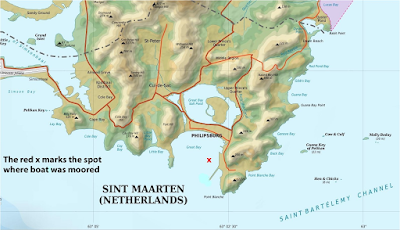 The size of the object is difficult to define but using a scale of 1 to 10 where 1 is a star and 10 is the moon (high in the sky and not close to the horizon) I would say it was a 4 at its closest point to us.

On a personal note I have always had a keen interest in flying and aviation since early childhood and always observe aircraft and have a good knowledge of their flight characteristics and also of their navigation lights I used to teach the theory of flight when I was a gliding instructor.