At about 4 a.m. on June 22, 2019, the remote Raikoke Volcano blew its top, sending a column of ash and gases rocketing ten miles high into the atmosphere above the northwest Pacific Ocean.

As luck would have it — and the word “luck” is particularly apt because this volcano rarely erupts — astronauts aboard the International Space Station were in position to observe the event. One of them captured the photo above. (For the full-sized image, please click here, and then click on the image again to zoom in.)

I offer this as one of my picks for the top images of Earth as seen from space during 2019. Keep reading for the others — an admitedly eclectic mix documenting breathtaking — and in one case terrifying — earthly spectacles.

Raikoke is one of a chain of volcanoes in Russia’s Kuril Islands. Comprising a small oval-shaped island with a crater a little less than a half mile across, the volcano most recently exploded in 1924, and before that, in 1778. June’s eruption sent ash into the stratosphere, where it was spread far and wide by the circulation of a storm. 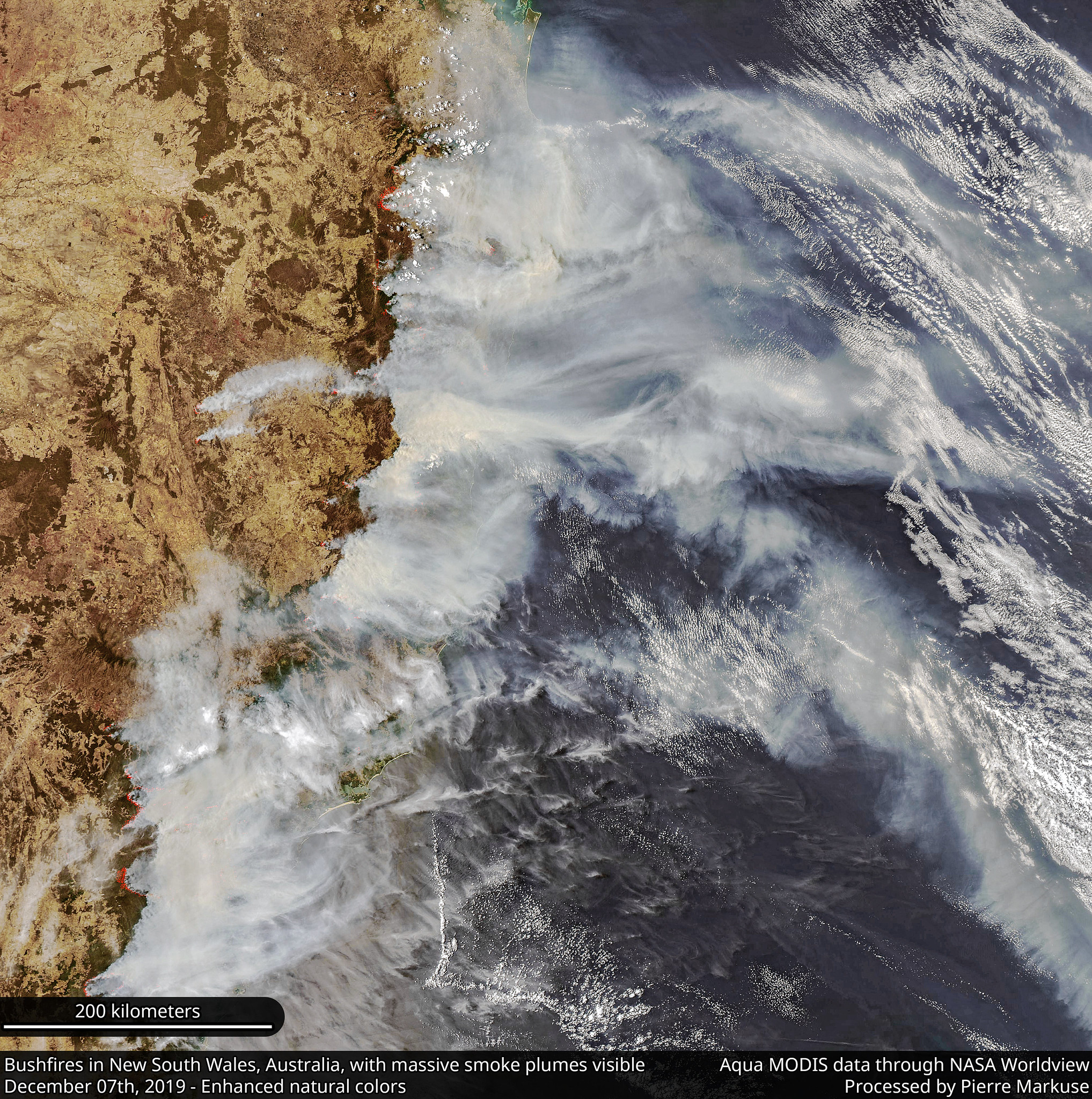 Thick palls of smoke stream from dozens of blazing bushfires in New South Wales, Australia, on December 7th, 2019. The almost unbroken line of fire seen in this stunning image stretches for about 500 miles north to south. That’s equivalent to the distance between New York City and Detroit. (Source: Pierre Markuse via Flickr)

I was tempted to lead this story with a remote sensing image of wildfires — like the terrifying one above, processed by the inimitable Pierre Markuse. It shows bushfires blazing earlier this month in Australia.

Globally, there have been a stunning number of very intense fires this year. And with one week yet to go in 2019, Australians are still under siege by the many dozens of bushfires raging across their country.

But rather than lead with wildfire, I decided to go with the Raikoke eruption image. That’s because it’s truly special — and not only because of its visual power.

The truth is that it’s relatively unusual for astronauts to be positioned at just the right place and time to photograph of a column of volcanic ash rocketing into the stratosphere right below them. And for the Raikoke eruption, their position was oblique enough for them to capture a particularly dramatic view.

You have to go back ten years to find a similar astronaut photograph of a volcano erupting. (That one, too, was in the Kuril Islands.) 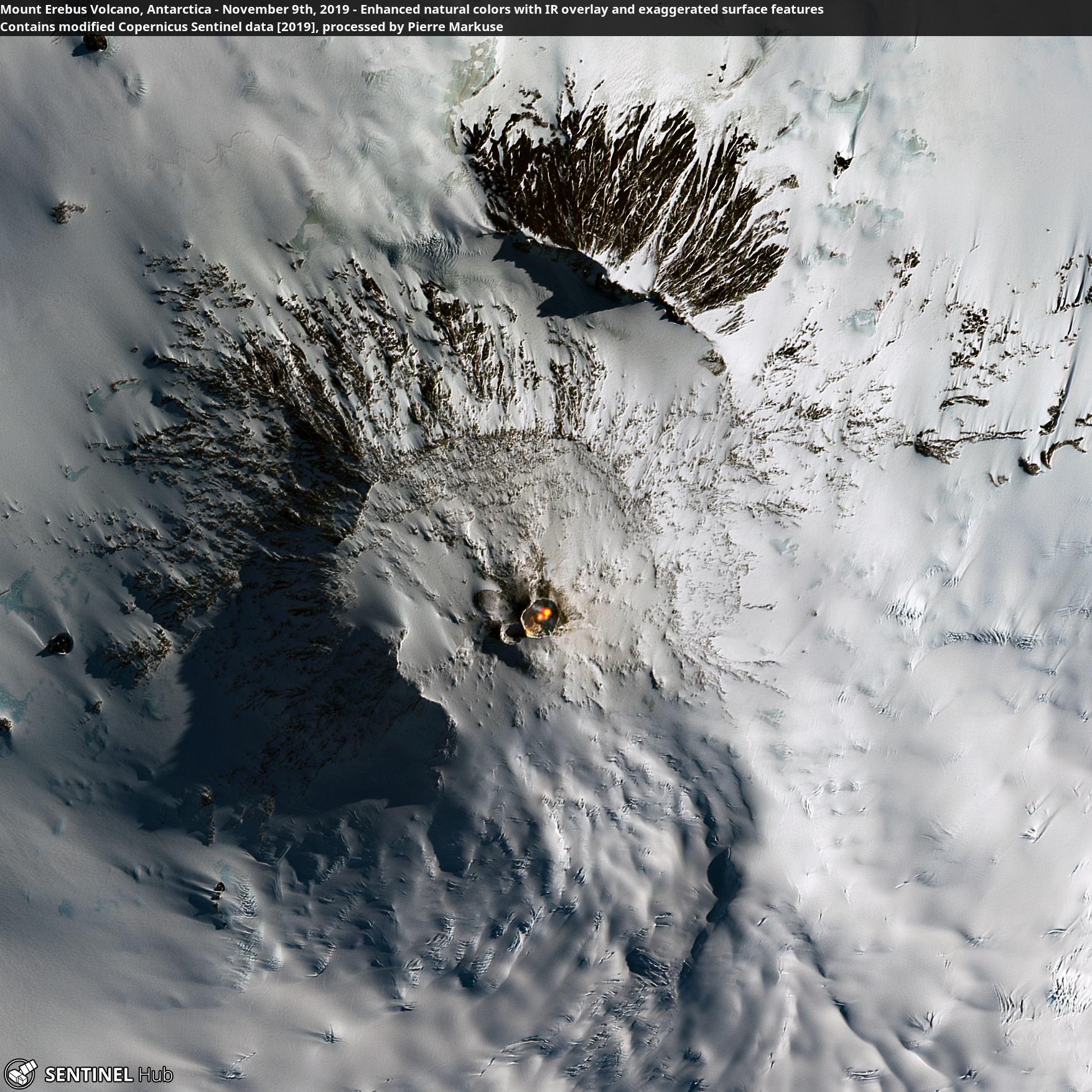 Mount Erebus — a volcano in Antarctica — as seen on Nov. 9, 2019 by a Sentinel satellite. (Source: Pierre Markuse via Flickr)

It may come as a surprise, but Antarctica has volcanoes too, including Mt. Erebus, the southernmost active surface volcano on Earth. You can see it in the satellite image above, also processed by Pierre Markuse.

That orange spot in the crater is the heat signature of the volcano, as revealed by infrared data that Markuse combined with visible light data to create the final image.

For a full-sized version of the image, click here: 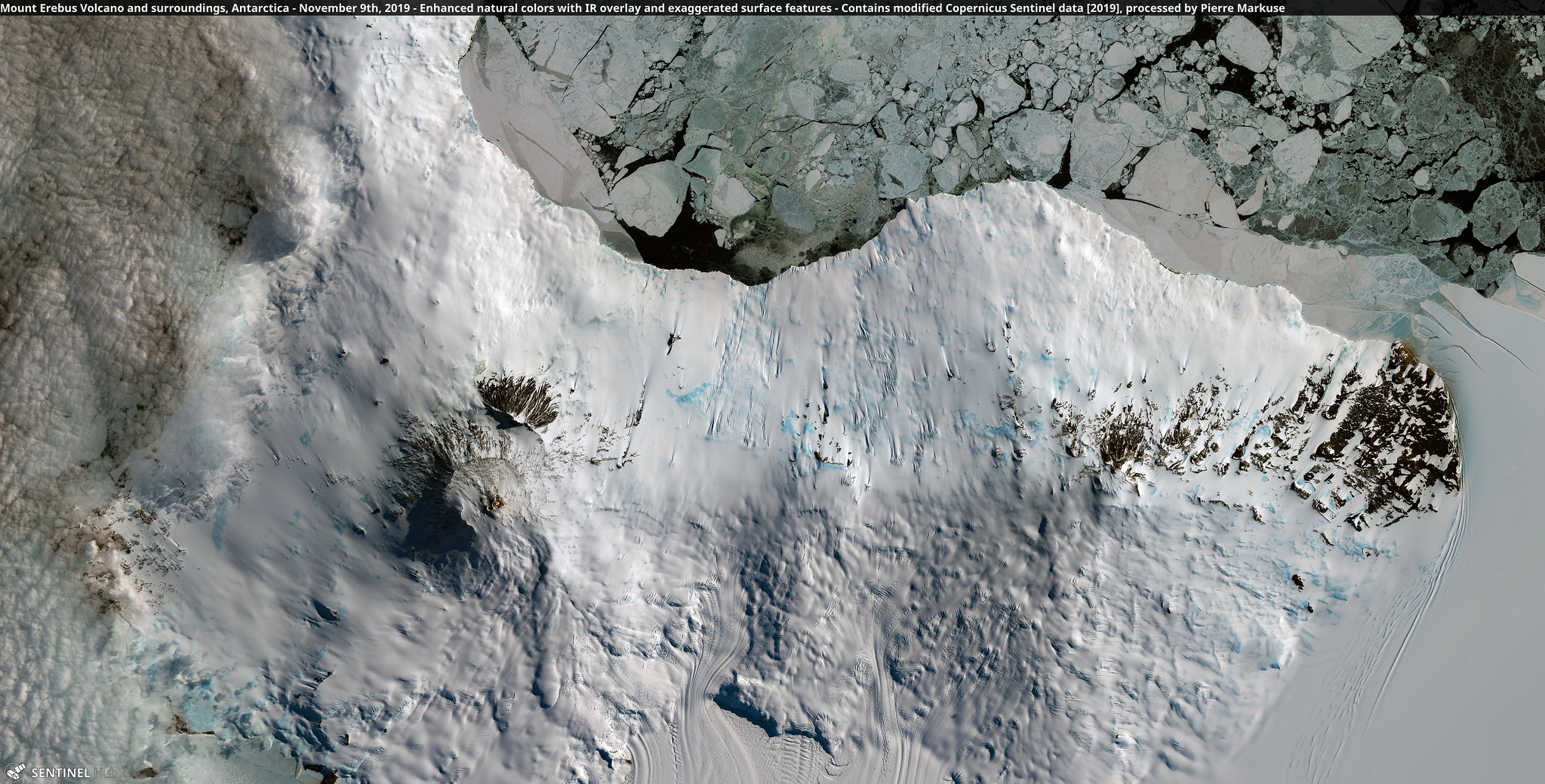 Here’s a broader view, showing the glaciated flanks of Mount Erebus, as well as floating sea ice along the coastline of Ross Island, which is dominated by the volcano.

For a full-sized version of this image, click here.

A false-color image of Russia’s Lena Delta acquired by the Sentinel 2 satellite on June 6, 2019. (Source: Annamaria Luongo via Flickr)

For sheer beauty, I don’t recall seing any remote sensing image in 2019 — or during any other year, for that matter — that tops the one above.

The false-color rendering was processed by Annamaria Luongo using data from the Sentinel 2 satellite. It highlights the many braids of Russia’s Lena River as they fan out into the Arctic Ocean. The dark blue bordering the river detla is open water, with lighter blue tones indicative of sea ice that has not quite melted out as summer begins here in the high north.

Here’s another stunning view of the Lena River Delta, this one published by NASA’s Earth Observatory as part of their wonderful roundup of top 2019 remote sensing images:

The animation above consists of images of the Lena River Delta acquired by NASA’s Aqua satellite from June 3rd to 10th, 2019. (Source: NASA Earth Observatory)

As NASA puts it, “After seven months being encased in snow and ice, the delta emerges for the short Arctic summer” — and you can see it happening over the course of just one week in this animation.

The Lena River stretches some 2,800 miles across Siberia, making it one of the largest in the world. The Lena Delta Wildlife Reserve is a protected wilderness area that provides an important refuge and breeding ground for many species of Siberian wildlife.

The Ganges Delta on the Indian Subcontinent is seen in this mosaic of false-color images acquired by the Sentinel-2 satellite between January 30th and February 1, 2019. The border between West Bengal in India, to the left, and Bangladesh, to the right, runs roughly north-south in the middle of the image.(Source: Annamaria Luongo via Flickr)

River Deltas often make for spectacular remote sensing imagery, particularly false-color ones. So I thought I would feature one more created by Annamaria Luongo — the image above showing the Ganges Delta. This river delta is our planet’s largest, sprawling across an area about the same size as the state of Pennsylvania.

Before and after views revealing massive flooding in the Midwestern United States, as seen by the Landsat 8 satellite on March 20, 2018 and March 16 of this year. (Images: NASA Earth Observatory. Animation: Tom Yulsman)

Rivers in the heartland of the United States experienced another round of extreme flooding this year, as seen in the before-and-after animation above.

In the “after” image, acquired by the Landsat 8 satellite on March 16th, the Platte and Missouri Rivers along with their many tributaries have expanded dramatically.

The flooding came in the wake of a “bomb cyclone” that dumped heavy rain atop snowpack with high water content. The resulting runoff triggered record-setting flooding throughout the Missouri and Mississippi river basins.

I created the animation for a story I published in March detailing how remote sensing was revealing the stunning scope of the flooding. In the animation, the Platte joins the Missouri toward the bottom right. Omaha is tucked in between these two major rivers. For a sense of scale, it’s about 150 miles as the crow flies from bottom right to top left of the images in the animation above.

The circular purple feature in this image, captured on Nov. 30, 2019 by South Korea’s GEO-KOMPSAT-2A satellite, is Typhoon Kammuri. The false colors reveal the temperatures of the tops of clouds. (Source: CIMSS Satellite Blog)

I’d be remiss if I didn’t include a storm image this roundup. I was struck by the one above, because it’s quite a bit different from the kinds of storm imagery we usually see.

The image is actually one frame from an animation of 30 collected in 10-minute intervals by a South Korean weather satellite. For a visual treat, please click here — and then come back for the details.

The imagery shows Typhoon Kammuri swirling over the Pacific Ocean on November 30th. Kammuri may not have been the strongest tropical cyclone of the year, but it set another kind of record — and a remarkable one at that.

The colors in the image aren’t there to please the eye (although they most certainly do that). Instead, they are indicative of the temperatures of cloud tops. The higher that clouds rise into the atmosphere, the colder they get. And in this case, Kammuri’s clouds rose particularly high — and got incomprehensibly cold.

The deepest purple color visible in the typhoon (the circular feature above and to the right of the image center) is indicative of temperatures colder than -80 degrees C. That’s about negative 110 degrees F!

But wait. Other remote sensing data showed that Kammuri’s cloudtops plunged to temperatures much colder than that.

When it was a Category 1 typhoon well east of the Philippines, Kammuri was generating exceptionally strong convection, pushing the tops of some clouds as high as 12.1 miles up into the atmosphere. As reported by my friend Bob Henson, a meteorologist who produces the Category 6 Blog for Weather Underground, the NOAA-20 satellite pegged the temperature just west of Kammuri’s center at –109.4°C.

On the Fahrenheit scale, that is 164.9 degrees below zero!

This appears to exceed by a wide margin the previous world record of –102.2°C (–148°F) from Tropical Cyclone Hilda east of Australia in 1990.

This image of star trails was compiled from time-lapse photography taken on July 5, 2019 from the International Space Station. (Source: NASA Earth Observatory)

I thought I’d bring things full circle with this image. As with the one at the top of the story, it was captured from the International Space Station — and it, too, is one of the NASA Earth Observatory’s top picks for 2019.

The image is actually a timelapse of more than 200 photos taken over a span of about six minutes by astronaut Christina Koch as the space station traveled from Namibia toward the Red Sea.

The lights that seem to circle a point in the upper left corner are star trails. These resulted from rotation of the space station as it orbited the Earth during the period that the timelapse was acquired.

On the surface of the Earth, cities appear as pale yellow streaks. Each dot in these streaks marks a single photographic frame that went itno Christina Koch’s timelapse. Many thinner dotted lines with darker orange hues are fires burning across Angola and the Democratic Republic of the Congo.

Above the Earth’s limb you can spot a faint green glow. This is, in fact, a phenomenon known as airglow. It happens when atoms in the upper atmosphere release energy they’ve absorbed from solar UV radiation.

And what about those white-purplish patches? These are bright lightning flashes crackling over central Africa!

As the new year gets under way, I’ll be looking out, as always, for particularly compelling images of Earth from space. So I hope you’ll check back here at ImaGeo.

And with that, let me wish you a very happy — and beauty-filled — New Year!