“Sell by,” “use by,” “enjoy by.” These familiar date labels are found all over our refrigerators and pantries — but what do they really mean?

These labels have left many of us confused and anxious — and may be causing some to throw away 25 percent of the food they buy. Experts say much of the food waste in the U.S. is linked to an unclear food dating system that has little to do with safety. One Harvard University study from 2013 found more than 90 percent of Americans have thrown food away because they misinterpret food label dates as an indicator of food safety.

Another, more recent study that peered into the kitchens of more than 300 U.S. homes uncovered additional findings that illustrate how pervasive the problem is. People in the study ended up throwing away nearly half the dairy, meat and produce in their refrigerators — largely because of date labels and other concerns around food safety. Young adults in particular are the worst food waste offenders, it found.

While no one wants food poisoning, when food goes in the garbage, it wastes money and strains the food supply. Let’s explore what these date labels really mean, and if there’s a better way to determine if the food in your pantry or fridge is still safe to eat.

Best By vs. Sell By

Contrary to popular belief, the date labels on food have little to do with food safety. Instead, they’re set by manufacturers and are intended to tell consumers and retailers how long food is expected to maintain peak taste and quality.

Date labels on foods are not regulated by the federal government, with the exception of baby food and formula. In much of the U.S., it’s legal for retailers to sell past-date food (except for baby products), but most stores choose not to.

Although the terminology that manufacturers use varies across the U.S., they are far from being warning labels:

It’s easy to see how consumers have misinterpreted these labels as hard-and-fast rules related to food safety. And the confusion adds up. A four-person family reportedly loses about $1,500 a year on wasted food, according to one report.

But the issue of food waste affects more than our wallets — food waste comes with tremendous environmental costs as well. Wasted food means wasted energy, water and fuel from production, transport and storage. Beyond that, most wasted food is destined to rot in landfills, where it emits methane, a greenhouse gas that’s 28 times more damaging than carbon dioxide.

When it comes to a food’s shelf life, there’s a lot of gray area. For example, year-old crackers may taste like cardboard, but they’re unlikely to make you sick. That’s because they’re likely packed with preservatives, and they’re a low-moisture food that’s less susceptible to microbial spoilage and pathogens. But that forgotten container of sour cream in the back of the fridge is another story.

Beyond that, a food’s acidic nature, it’s particular enzyme and microorganism make up, whether it’s salted or brined, and storage practices can all influence a food’s shelf life.

Despite this, cases of people who got sick from eating expired food aren’t as common as you’d think. Data on food poisoning from expired food is scarce, but Devin Bowes, a nutritional epidemiologist at Arizona State University, explained that the bulk of food-borne illnesses typically arise from unsanitary food prep or improper storage.

“The biggest factor in food poisoning is known to be improper storing and handling of food, such as neglecting to properly sanitize a cutting board when cooking with raw meat,” she said in an email to Discover.

Yet internet forums are full of people asking for advice on whether they should eat week-old chicken breast, or if they should throw out milk that’s past date but smells fine. To that end, our basic senses — sight, touch and smell, in particular — are attuned to many of the signs that food is no longer safe to eat.

“Humans have an innate ability to sense issues with food, ranging from appearance to smell to tactile clues,” said Rolf Halden, an environmental health engineer and researcher at Arizona State, in an email to Discover. “While this is not perfect, it enables us to quickly reject food that potentially is compromised.”

Read more: The Sense of Smell in Humans is More Powerful Than We Think

So, taking a “better safe than sorry” approach is probably best for overly cautious consumers. But Halden acknowledged that it might mean throwing away food that’s perfectly safe to eat. One of the best ways to combat this is to only purchase an amount of food your household can realistically consume. And food preservation methods like freezing can safely extend the shelf life of many foods.

But if you find yourself in the middle of making dinner and aren’t sure if a key ingredient has gone bad, referring to USDA guidelines and paying attention to sensory clues can also go a long way toward reducing the risk of food-borne illnesses. If you’re not sure what to look for, Discover has compiled a list of recommendations from the USDA and other sources that may help clear things up.

For any question or concern not covered, consider giving the the USDA Meat and Poultry Hotline a call at 1-888-674-6854. They receive 50,000 food safety questions a year — so it’s safe to say they’ve probably heard it all.

Research has found that sell-by dates on milk cartons significantly influence perceptions of safety — which results in a lot of milk spilled down the drain. But as long as milk has been properly refrigerated, it should be still drinkable up to a week past the date label — and maybe up to two weeks, depending on the temperature of your refrigerator.

Generally, as long as the milk smells and looks OK, it’s probably still safe to consume. But even accidentally consuming milk that has gone a little sour probably isn’t going to cause a serious illness, since the pasteurization process kills most disease-causing pathogens.

But not everyone is throwing away milk that makes noses crinkle. Instead, they’re cooking with it. Sour milk’s acidic nature reportedly makes it a good substitute for buttermilk.

You might want to draw the line when milk starts to get chunky, though. At that point, your milk is on its way to becoming cheese.

No one likes a bad egg. Thankfully, eggs have a surprisingly long shelf life if kept in a fridge — up to five weeks after their sell-by date. If you’re worried that you might have rotten eggs on your hands, crack one open and check for a foul odor or discoloration. If the egg looks and smells normal, it’s probably fair game for your omelet.

Most hard and semi-soft cheeses will keep around six weeks after the printed sell-by date. And if you see some blue or green mold growing on the block of cheddar you rescued from your fridge, don’t fret that your dinner is ruined. Mold generally can’t penetrate far into hard and semisoft cheeses. Simply cut the moldy pieces off with a 1-inch margin, and bon appétit.

But you probably wouldn’t want to mess with moldy soft cheese, like cottage cheese, feta or cream cheese. These cheeses have a higher moisture content, which makes it easier for molds to penetrate the entire block or container.

If you live alone, you can probably relate to the struggle of finishing an entire loaf of bread by yourself. Bread is typically safe to consume at least a week beyond its sell-by date — and maybe longer, depending on how much you like the taste of stale bread.

Most food safety experts would recommend throwing away the whole loaf if you spot a moldy slice or two. Because bread is porous and soft, it’s thought the mold can easily spread through the whole loaf.

But if you’re adamant about that ham sandwich, you can try salvaging bread by cutting away the mold with a large margin and closely inspect the remaining bread to see if you got it all. You wouldn’t be the first — or the last — to do so.

Nothing conjures fears of spending the night in the bathroom or ER quite like contaminated meat. And, coincidentally, knowing whether meat is still safe to eat can be a bit trickier.

The USDA recommends that poultry and ground meats should be used or frozen within one to two days of purchase. Cuts of beef have a little more leeway and can hang out in your fridge around three to five days after purchase. 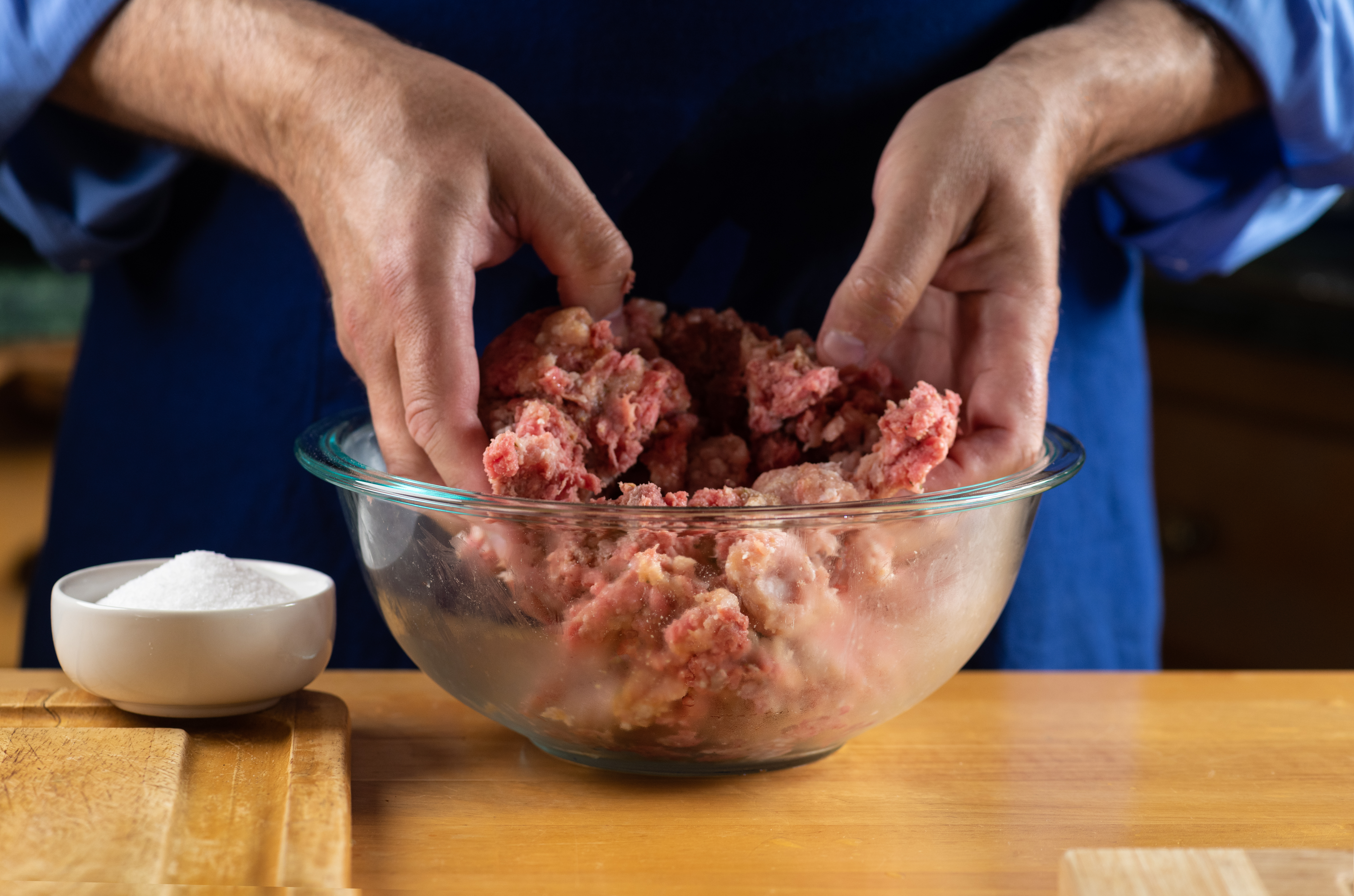 But these guidelines may strike some as overly conservative. If you trust your nose, you may be able to fudge these recommendations a bit.

It’s normal for raw meat to have a slight, neutral odor. But you should avoid eating meat that has developed a rancid odor that smells slightly sweet. Texture changes can also be a sign that your raw meat belongs in the trash heap. Moist to the touch is normal, slimy is not.

Many of us may also have noticed that meat can change colors in our fridge. Beware of chicken that’s taking on a gray or yellow tinge — it’s probably spoiled. But beef that is graying or browning from the natural oxidation process is usually safe to eat as long as it’s not sticky or smelly.

Keep in mind that disease-causing pathogens like Salmonella and E. coli strike without giving away any visual or olfactory clues. That’s why it’s important to cook meat until it reaches the minimum internal temperature required to kill the bacteria that can make you sick. A meat thermometer is a small investment toward your peace of mind.

Unsure of what to do about limp carrots or mushy avocados? Wilted, browning or bruised fruits and veggies are unlikely to make you sick. According to Bowes, consuming fruits or veggies that are past their prime isn’t as risky as eating questionable meat. Still, there are things to keep in mind.

Produce can be a magnet for mold. Depending on what your internal gross meter allows for, you can safely salvage a container of strawberries by throwing away the few berries that are getting moldy. Likewise, hard produce (like apples, potatoes and cauliflower) can often be eaten after cutting away the moldy part.

While many food safety experts would recommend tossing salad greens that are starting to get slimy, many frugal home cooks and chefs give wilting greens a second life by tossing them in a stir fry or soup — and have lived to tell the tale.