The explosions at La Soufrière on St. Vincent that started last week appear to only be a throat clearing. Earlier today (April 12), the volcano unleashed even larger explosions and sent pyroclastic flows racing down the volcano after the dome collapsed. This is very bad news for anyone who might have remained in the Red Zone around La Soufrière.

Ash from the explosions have reached well over 40,000 feet (12 kilometers) and is readily seen drifting across the Atlantic to the east of St. Vincent. The towns on the island itself are getting a steady rain of ash and there have been reports of collapsed roofs. Remember, volcanic ash is many times denser than snow, so a few inches of ash (especially when combined with rain) can easily collapse weak roofs. The University of West Indies Seismic Research group thinks we should expect at least a few more days of explosions, possibly many more. 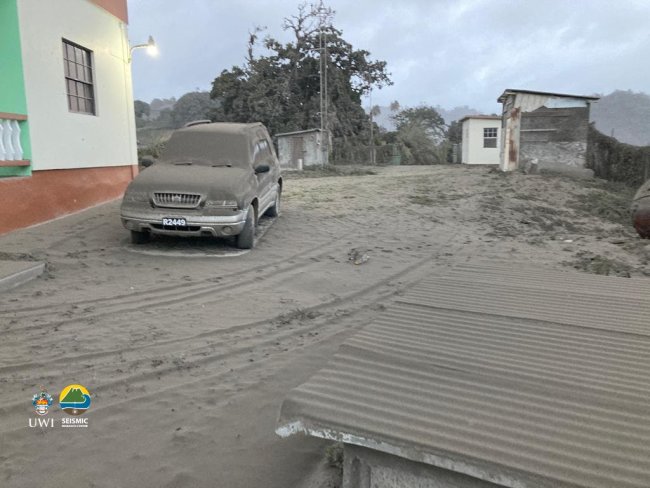 Ash from the eruption of La Soufriere on St. Vincent. Just a few centimeters of ash can be hazardous to health and property. Credit: U of West Indies.

Although it is impossible for volcanologists to get close to the volcano to see what is happening, they can look for clues in data like seismicity, ash composition and shape as well as gas emissions. The seismicity can show that pyroclastic flows are rushing down the sides of the volcano as they can produce an identifiable seismic signal. It can also show whether magma is still rising up into the volcano — as provided that seismometers are still operational.

Volcanic ash shape can offer information of how much new magma is involved in the eruption — the more curved and sharp like broken glass, the more new magma. Volcanic gases can offer more evidence as well, where more volcanic gases, like more new magma reaching the surface. Remember, volcanic ash is not like fire ash! Ash from an eruption is broken pieces of rock or glass and aren’t formed from burning. They can get into your lungs and do real damage, very fast.

If these explosions are happening as a cycle of new basaltic andesite domes form, then we might expect to see these eruptions continue. The sticky basaltic andesite will erupt, helping build pressure until the dome fails, unleashing an eruption. Then, the cycle begins again.

Tan ash from the eruption of La Soufriere on April 10, 2021, spotted by Suomi NPP. Credit: NASA/NOAA.

The current and only webcam pointed at La Soufrière shows all the billowing ash (although you should ignore the “explosion prediction” shown on the right — it is nonsense). There have been a bounty of images of the explosions seen from space as well, where the GOES-15 GOES-16 and GOES-17 weather satellites have captured the growing ash plumes.

The blowing ash darkened the skies of Barbados, over 100 miles to the east, and fell as a thin, dark layer of dust. The explosions at La Soufriere were recorded by infrasound (low frequency) on Guadelope, almost 200 miles (300 kilometers) away.

There is some indication that this eruption is similar to what occurred during the 1902 activity at La Soufriere. During those devastating eruptions, over 1,000 people died during the repeated explosions and pyroclastic flows. Of course, this was before the modern study of volcanoes was born (partially from the that eruption and nearby Pelée, also in 1902)