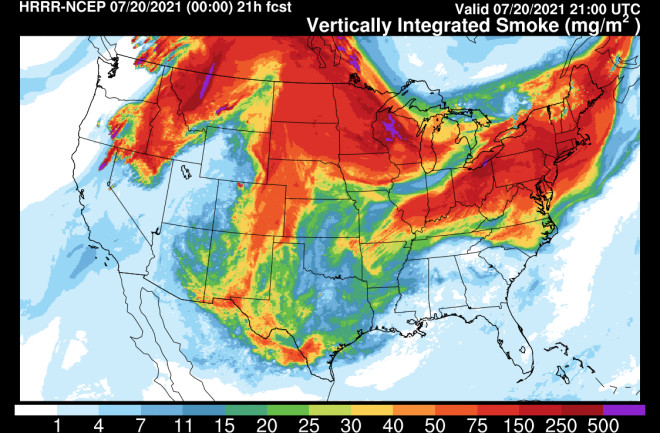 Smoke from wildfires in the western United States and Canada spread nearly coast to coast, and from Canada to Mexico, on Tuesday, July 20, 2021, as seen in this map based on computer modeling output. (Credit: NOAA Global Systems Laboratory)

Yesterday, as my daughter sat in the stands of New York City’s Yankee Stadium, she turned her gaze from the players on the field to the sky. She was unsettled by what she saw: a miasma of air pollution.

“I’m at a Yankees game and the sky looks like Shanghai,” she texted me. “Is it from the fires?”

I was in Boulder, Colorado, where our own skies were filled with gunk and the air quality had declined to “UNHEALTHY FOR SENSITIVE GROUPS.” (That would include me, since I have asthma.)

So I checked satellite imagery, and sure enough, smoke from fires in the northwestern United States and Canada had been swept up by the jet stream and carried across the continent. I could see clearly that New York was under a thick pall.

You can see the pall in the video above, consisting of images acquired by by the GOES-16 weather satellite.

Blazes Burn On and On…

“Wildfires continue to burn actively across 13 states, where 78 large fires and complexes have burned 1,346,736 acres,” the National Interagency Fire Center reported in its update today (July 21). That’s more than four times the size of the city of Los Angeles. “New large fires were reported in California, Montana and Wyoming.”

Battling the blazes are more than 20,700 wildland firefighters and support personnel.

The animation above, based on computer modeling output, shows smoke spreading almost coast-to-coast. The purple color shows the thickest concentrations and can help you locate individual fires. In particular, look at northern California, southern Oregon, northern Washington, and British Columbia. Much of the smoke is coming from wildfires in these areas.

This view from the GOES-16 satellite stretches from Colorado and the Rocky Mountains on the left, all the way to the Atlantic coast on the right. In the animation, clouds are white and mostly obscure the ground, whereas the smoke has a somewhat duskier tone and is not opaque. Take a look at the Northeast and you can clearly see smoke drifting out over the North Atlantic.

On July 17, 2021, smoke from North American wildfires had blown all the way across the North Atlantic to Norway and Sweden, circled in red in this map of the smoke distribution. (Credit: Copernicus Atmosphere Monitoring Service)

In fact, smoke from North American wildfires has already made it across the Atlantic, as this map shows. I’ve circled a patch of smoke that on July 17th had made it all the way to Norway and Sweden.

Thanks to conditions that are expected to remain hot and dry, the outlook is unfortunately for significant wildfire risks across large portions of the Western United States and even into the Upper Midwest during the rest of July and through August.