9 lights visible, then it becomes 12 lights in formation, closest object disappears then 3 more objects reappear on outside of formation. 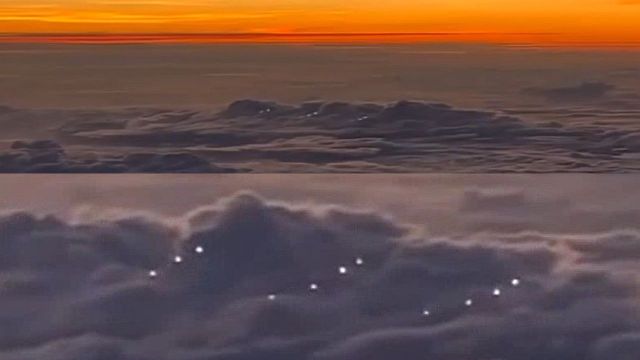 New tracking technology may have finally solved the mystery of flight MH-370 which disappeared 7-and-a-half years ago  British aerospace engineer, Richard Godfrey has spent the last 9 months using new tracking technology known as ‘weak signal propagation’ combined with data from the satellite communications system onboard MH370 to track the missing plane’s doomed final flight.  “Together the two systems can be used to detect, identify and localize MH370 during its flight path into the Southern Indian Ocean,” he said to 7news . According to his report, the aircraft crashed about a minute after the final satellite link-up at 8.19am over the Indian Ocean.  He claims to have pinpointed the precise coordinates where Malaysia Airlines Flight 370 crashed and dropped to the bottom of the southern Indian Ocean, injecting new hope the plane will be found. He believes the wreckage is 1,900 kilometers west of Perth, lying at a depth of 4-thousand meters, allowing experts to hone in on a mo
JP has served for almost two years in the US Army and has come forward to give his first interview discussing secret military missions by an international space coalition to the Moon, Ganymede and other locations in the solar system.  In this exclusive Exopolitics Today interview, JP discusses his background, why he decided to join the US Army, secret missions to Earth’s Moon and Jupiter’s moon, Ganymede, where he met with different extraterrestrial entities.  He says that a group of recently arrived highly evolved extraterrestrials are having life changing effects with soldiers and others with whom they come into contact.  JP is keeping his name and physical appearance confidential to preserve his career, but is encouraging other former or serving US military personnel to come forward to share their own extraterrestrial related experiences.  In this video interview, Exopolitics Today only included the audio to protect his identity.  At the end of the interview, a short 3.5 min
Looking at the famous Da Vinci, “The Last Supper” picture, mirroring and inverting the picture in the correct way, inverting it right down the middle you get a hidden image that is unbelievable. What is revealed is absolutely Jaw Dropping! The question is, what did Da Vinci Know that he is trying to reveal? Link: Photo’s “The Last Supper Wikipedia http://upload.wikimedia.org/wikipedia/commons/3/34/DaVinciCodeSolution.jpg Original http://dl.dropboxusercontent.com/u/3687918/the_original.jpg Mirror http://dl.dropboxusercontent.com/u/3687918/Mirror_aligned.png
Scientists have created astonishing new “living programmable organism” a super-sophisticated robot capable of self-replication.  The Xenobots, computer-designed bio-robots, were adapted from frog stem cells and have now been programed to self replicate, spawning ‘babies’ from their Pac-Man-like mouths. Then these new Xenobots can go out, find cells, and build copies of themselves. Again and again.  They hope that the self-generating Xenobots could advance personalized drug treatment for cancers, traumatic injuries, birth defects, and other major health issues.  But is it the future of modern medicine? Technology futurist Ian Khan cautions against excessive optimism or excitement blinding us to the risks involved in the dawning technology. Robots that reproduce themselves ‘aren’t giant monsters — yet’  By creating these self-replicating “living robots,” the scientists are essentially answering the idea that self-replicating alien probes, known as von Neumann probes