A 3D render created of what looks like an artificial anomaly discovered in Protonilus Mensae on Mars. 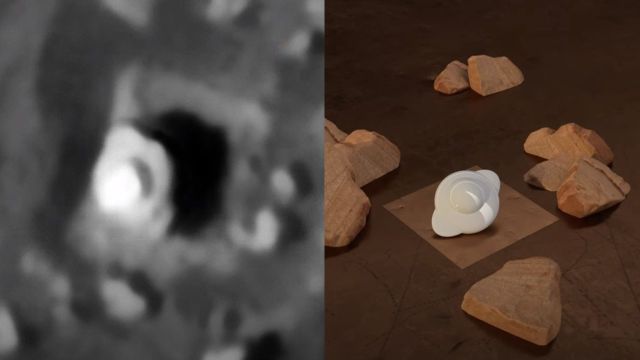 The footage shows an anomaly what appears to a disc shape with a dome on top and two smaller semi-circular parts on either side.
The anomaly is lying on it’s side on a rectangular area that seems cleared out.
[embedded content]

I spy with my barreleye, a new Fresh from the Deep! During a dive with our education and outreach partner, the Monterey Bay Aquarium, the team came across a rare treat: a barreleye fish (Macropinna microstoma).  MBARI’s remotely operated vehicles Ventana and Doc Ricketts have logged more than 5,600 successful dives and recorded more than 27,600 hours of video—yet we’ve only encountered this fish nine times!  The barreleye lives in the ocean’s twilight zone, at depths of 600 to 800 meters (2,000 to 2,600 feet). Its eyes look upwards to spot its favorite prey—usually small crustaceans trapped in the tentacles of siphonophores—from the shadows they cast in the faint shimmer of sunlight from above.  But how does this fish eat when its eyes point upward and its mouth points forward?  MBARI researchers learned the barreleye can rotate its glowing green eyes beneath that dome (head) of transparent tissue.  Aquarist Tommy Knowles and his team were aboard MBARI’s R/V Rachel Carson with our ROV
Looking at the famous Da Vinci, “The Last Supper” picture, mirroring and inverting the picture in the correct way, inverting it right down the middle you get a hidden image that is unbelievable. What is revealed is absolutely Jaw Dropping! The question is, what did Da Vinci Know that he is trying to reveal? Link: Photo’s “The Last Supper Wikipedia http://upload.wikimedia.org/wikipedia/commons/3/34/DaVinciCodeSolution.jpg Original http://dl.dropboxusercontent.com/u/3687918/the_original.jpg Mirror http://dl.dropboxusercontent.com/u/3687918/Mirror_aligned.png
China’s Yutu-2 rover spotted a strange cube-shaped object in Von Kármán crater on the dark side of the moon. Since the rover is about 80m away from the fuzzy object the rover team is planning to drive over and get a closer look at the object. Although they are talking about a cube-shaped object, the object seems to consist of two towers. The true nature of the object should be become clearer as the rover gets closer.
Unknown bright object slowly hovering over a mountain near Las Vegas.  Two unknown spheres in the sky over El Centro, California, then the first sphere ejects several smaller orbs.  Two unknown objects staying the same distance apart, traveling east to west over Middleton, Massachusetts, there was no contrail, no engines, no tail or wings, and no sound. Credit: www.mufon.com