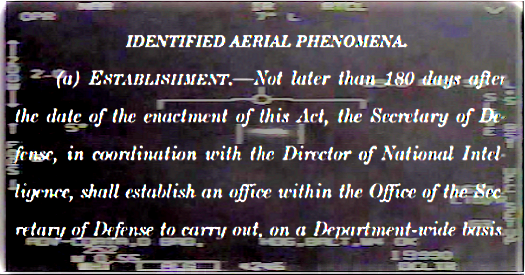 Been a long time comin’

Clinking a glass to today’s milestone of bipartisanship: The appearance of democracy getting a break after nearly four generations of military intelligence resistance to opening the books on UFOs is better than no appearance at all.

of the late afternoon light through the kitchen window when Mom calls from 650 miles away to say her diagnosis is terminal.

What I remember: It was clear-blue cool the day the Earth stood still, arid, low 70s, invigorating for Florida. The December sun drew the critters to the surface at the state park down the road. A couple of gopher tortoises, an armadillo, the biggest glass lizard in memory, maybe two feet long, or more. Following the five-mile hike came a long exhale on the 10-speed home; by time I shook the sand off everything and hit the laptop, it was early afternoon.

“WASHINGTON – In the $600 billion annual Defense Department budgets, the $22 million spent on the Advanced Aerospace Threat Identification Program was almost impossible to find …”

UFOs — the white whale. At last. Lead image above the lead graph: official U.S. Navy gun-cam footage, alternating from television to infrared modes, F-18 pilot exchanges recorded in pursuit. “There’s a whole fleet of ‘em, look on the AESA.” “My gosh!” “They’re all going against the wind, the wind’s 120 knots to the west … Look at that thing, dude …” “Look at that thing!” “It’s rotating.”

And within the space of 30 seconds, a single video packed with digital metadata accomplished what 70 years of “modern” UFO documentation had not – confirmed that those of us who’d looked up and gaped at the incomprehensible weren’t crazy or hallucinating. Well, many of us. And the Pentagon – those publicly indifferent star-spangled uniforms who for generations thought it better to let us doubt the sanity of our own curiosity than to toss us a bone – turns out those sneaky guys and gals had a few secrets of their own.

I raced through the article, the names, the acronyms, the numbers, the dates, the places, all of it pointing toward something I knew viscerally to be true. But I didn’t laugh out loud until I got to the sidebar, to the part where Navy pilots David Fravor and Jim Slaight emerged fearless in retirement. They described the aftermath of their 2004 encounter, in which a UFO shaped like a breath mint had run circles around their jet fighters.

“They were en route and closing in when the Princeton radioed again. Radar had again picked up the strange aircraft. ’Sir, you won’t believe this,’ the radio operator said, ‘but that thing is at your cap point.’ ‘We were at least 40 miles away, and in less than a minute, this thing was already at our cap point’ …”

Good god. This wasn’t just about propulsion, hardware and technology – this was about reality itself, demanding new definitions. But there was no lag time in this scoop’s impact; I knew right then and there, the world had changed. And I knew I had changed, too. Because this was personal, as the news no doubt was for countless other fellow Earthlings who had learned to table this very real conversation for some other time, some other place.

I went noodling around for more — and there, a second story, from Politico, not Alex Jones, independently corroborating details on the Pentagon’s clandestine dive into the The Great Taboo. Then another story. And another. And the minutes turned to hours, and the wire services and global newsies all piled on, some with the urgency of a terrorist bombing or a celebrity fashion disaster. Just as my parents had saved the paper from JFK’s blood-splattered limo dash out of Dealey Plaza, this was history, and I needed an old-school memento.

I headed out to the bookstore early Sunday morning, where the Times was sitting on the rack. Its top stories were more reruns, including two (2) analyses of Republican tax bills. A third threw a spotlight on how “reformer” Mohammed bin Salman had annexed Chateau Louis XIV outside Versailles for $300 million. Six bucks later, there it was, underplayed below the fold, but a headline on 1A real estate nevertheless: “Real U.F.O.s? Pentagon Unit Tried to Know.”

So much has happened since then. So many moving parts and falling dominoes, enough to fill a book, too dense to tally here. But all those interlocking efforts have brought us an overdue payoff. Consequently, today, this day, is like none other in American history.

Just one day shy of the four years since the Times broke the AATIP story, Congress has passed and dispatched the National Defense Authorization Act spending bill to the Oval Office for a rubber stamp. Included in the mandate is an order for the Secretary of Defense and the Director of National Intelligence to collaborate on getting a grip on the UFO challenge. The nerve center of this joint effort is a laughable acronym, AOIMSG, or the Airborne Object Identification and Management Synchronization Group. But amid this most dangerously polarized Congress in living memory, a bipartisan show of lawmaker support isn’t laughing.

AOIMSG is commanded to be up and running within 180 days of President Biden’s signature, and to brief the heads of select congressional committees in classified settings twice a year. By the end of 2022, it will issue an unclassified report. The itemized areas of interest are broad. They include a presentation of UFO/UAP incidents involving nuclear assets, physiological harm suffered during such encounters, and “an update on any efforts underway on the ability to capture or exploit discovered unidentified aerial phenomena.”

The bill on Biden’s desk is flawed, of course. One the strongest parts of the original language — proposed by Sen. Kirsten Gillibrand (D-NY) to include an advisory board of 25 civilian scientists — didn’t make the cut. And for now, AOIMSG will answer to the Office of the Under Secretary of Defense for Intelligence & Security, or OUSD(I&S). This is the bureaucracy that, according to Pentagon whistleblower Luis Elizondo and former USD(I&S) Chris Mellon, is unqualified to handle these chores and have actively resisted outsider scrutiny.

Whether this effort becomes the envisioned window into transparency on America’s darkest closet or just another cynical exercise in information control/image rehab remains to be seen. We’ll hash out some of those reservations in the near future. For now, until the brass begins to disappoint us, let’s just say well done, to the lawmakers who proved they actually are capable of working together, to the persistence of Elizondo and Mellon, to the journalists who’ve made this moment possible, and to everybody who got off their asses and actually contacted their public servants.

The only analogy that comes directly to mind is the bitter feuds that preceded the Partial Nuclear Test Ban Treaty of 1963. In a world where radioactive fallout from WMD testing poisoned the food supplies of friend and foe alike, military-industrial complexes on both sides of the Iron Curtain pushed back against calls to take this insanity underground. Establishment heavyweights in the West, like Atomic Energy Commission chair Lewis Strauss, and hydrogen bomb architect Edward Teller, once argued the very fate of our nation hinged on the continuation of atmospheric atomic experiments.

Anyway … here’s hoping that today marks the beginning of the end of the Cold War’s final chapter, a line of demarcation where future generations will look upon our pathological insecurities and wonder, “What the hell was that all about?”