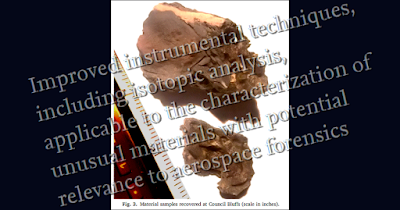 was made available on line on 9 December 2021. Many thanks to researcher Jonathan Davies for pointing me to this article.

The introduction spells out that precisely identifying unknown material is an issue, in a number of areas, e.g. medicine, space exploration, and military intelligence.

The first section of the article reviews analytical processes which are currently in use, e.g. mass spectrometry and x-ray spectroscopy. The second section “Basic approaches for the initial characterization of unknown materials” reports on the material analysis using Inductively Coupled Plasma Mass Spectrometry (ICP-MS) and Secondary Ion Mass Spectrometry (SIMS.) These determine the masses of atomic components of the material. Other analytical processes are also discussed. 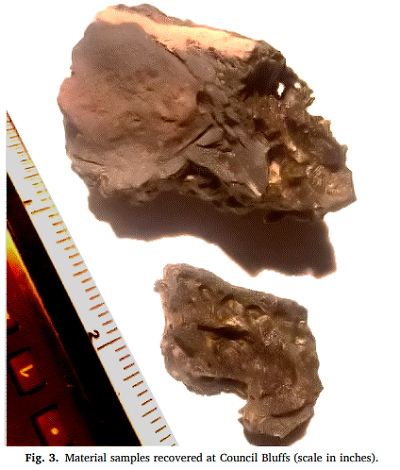 Section 3 “Investigating unknown material collected in the field: A Case Study” concerns an incident on the 17 December 1977, which occurred in Council Bluffs, Iowa. At 1945 CST “…a red, luminous mass was observed by two Council Bluffs residents, as it fell to Earth near the northern city limits…” At the scene the witnesses found an area “…covered by molten metal that glowed red-orange, igniting the grass. Police and fire brigade personnel who attended the scene within 15 minutes all saw the mass, estimated at 35-55 pounds. An investigation was conducted with three initial thoughts in mind. These were, an industrial accident, an aeronautical malfunction or a meteorite (despite there being no cratering.) After investigations, it was concluded that it was not re-entering space debris; not falling material from an aircraft, not a meteorite, nor was it a hoax. It was also noted that two witnesses of the eleven witnesses, described a round object hovering in the sky, edged by red blinking lights.

The retrieved material had three components, namely “solid metal, slag and white ash inclusions in the slag.” Vallee provided a piece of the original material for further testing. “…our initial conclusion was that sample components were consistent with a terrestrial origin.” A recently developed Multiplexed Ion Beam Imaging” (MIBI) instrument was used which is capable of measuring a broader range of isotopes. Using this instrument investigators concluded that “All isotopic ratios were similar between the samples and did not show any statistically significant deviations from expected terrestrial normal except for 57Fe…” However, there was a suggested conventional explanation for this 57Fe deviation.

“Our experience with the Council Bluffs case study shows how difficult such a determination can be, even when abundant evidence is collected within minutes of an event, supported by reliable testimony from multiple witnesses and in well-defined meteorological conditions.”

The authors speculate about the hovering, round object edged with red lights; that “Such an object might have ejected the mass of material observed by the other witnesses and recovered by police.” They note that “The materials from Council Bluff show no evidence suggesting it was (sic) been engineered or designed. The material would not be expected to form naturally, and has been shown does have unusual inhomogeneity.”

1. An excellent, peer reviewed paper in a significant international journal, which introduces the topic to the broader aerospace community.

2. Some UAP / [UFO] researchers might suggest that the paper doesn’t go far enough in taking a look at other unusual samples associated with UAP / [UFO]. However, the authors note that:

“The objective is to provide data in an open-source manner so that others might replicate the analytic approaches or divine a testable hypothesis of why and how such materials are deposited or left behind . To many this will feel incomplete or insufficient, but this would be a premature conclusion. In the case of Council Bluffs, however, the data is verifiable…it is only the origin and nature of the material (and the phenomenon in general) that remains open.”

3. On page 3 of the article there is reference to one of the Defense Intelligence Reference Documents produced by the Advanced Aerospace Weapon System Applications Program, namely the one on “Metallic Spintronics.”

4. There is also mention of the fact that the authors are conducting other analyses on other pieces of unusual materials.

5. All in all, it is the paper most of us were waiting for. Hopefully, just the first of many similar articles.