A 1,200-meter-high monolith discovered on Mars. While other objects near the monolith are unrecognizable and blurred, this object is clearly present since a shadow on the monolith appears on opposite side from the sun. 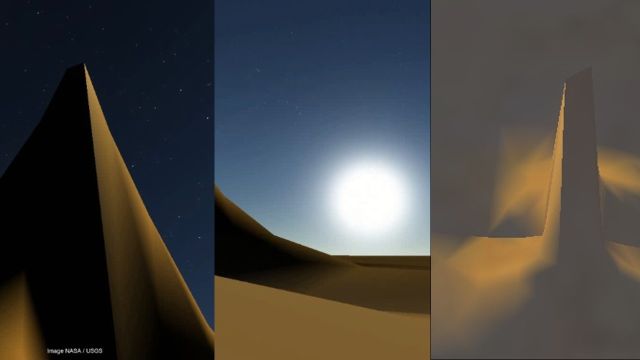 Therefore it seems unlikely that the monolith is the result of a digital image artifact, stitching error or glitch.
Google Mars coordinates: 31° 3’48.78″S 74°15’18.46″E
[embedded content]

On December 17, the Farsight Institute released the results of multiple remote viewing sessions investigating the alleged existence of an “Ashtar Command” and whether it had a floating base hidden in the clouds of Jupiter. The results of the remote viewing sessions, conducted using blind scientific protocols, support the claims of several recent ‘contactees’ that the Ashtar Command existed, and that its Jupiter facility was used as a meeting place for secret agreements reached between 14 spacefaring nations and several extraterrestrial organizations in July 2021.
Meet Ameca, the world’s most advanced humanoid robot. Created and designed by Cornish robotics company Engineered Arts, Ameca is hyper-realistic with fluid movement and a face that could almost pass for human.  While Ameca can’t dance as well as a Boston Dynamics robot or parkour like the Caltech bipeds, the leap forward in realistic facial animation is equal parts magnificent and terrifying. The robot has been called the ‘future face of robotics’ and ‘the perfect humanoid robot platform for human-robot interaction.’  A video provided by the engineers shows the robot defends itself by grabbing a researcher’s hand as it enters it’s ‘personal space’. According to the developers, even they were ‘freaked out’ by the machine’s behavior.     Engineered art also revealed a video of an extremely realistic Adran robot head with eerily human-like facial expressions and movements.       Humanoid robots are becoming reality, but what happens when these robots walk on the street o
Exopolitics Today: Dr. Michael Salla interviews Brad on how extraterrestrial life and black magic have been integral components of the global control system created millennia ago to subvert humanity, and has over the last 50 years prevented the emergence of a Star Trek Future.  As the Deep State unravels and cabal leaders escape Earth due increasing public resistance to their policy agenda and intervention by an alliance of positive extraterrestrial groups working with “White Hats” from different spacefaring nations (the ‘Earth Alliance’), it has been claimed that the magical keys and codes used to subjugate humanity, are being surrendered.  This interview discusses what would be involved in the handover of magical keys and codes used by the Cabal, and how this is necessary to bring about our Star Trek Future.
Looking at the famous Da Vinci, “The Last Supper” picture, mirroring and inverting the picture in the correct way, inverting it right down the middle you get a hidden image that is unbelievable. What is revealed is absolutely Jaw Dropping! The question is, what did Da Vinci Know that he is trying to reveal? Link: Photo’s “The Last Supper Wikipedia http://upload.wikimedia.org/wikipedia/commons/3/34/DaVinciCodeSolution.jpg Original http://dl.dropboxusercontent.com/u/3687918/the_original.jpg Mirror http://dl.dropboxusercontent.com/u/3687918/Mirror_aligned.png