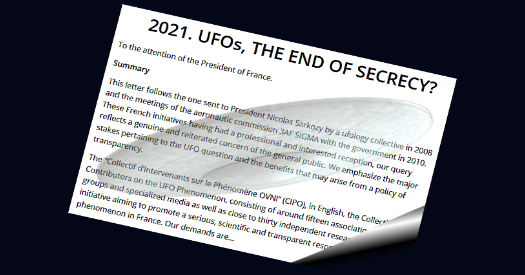 a ufology collective in 2008 and the meetings of the aeronautic commission 3AF SIGMA with the government in 2010. These French initiatives having had a professional and interested reception, our query reflects a genuine and reiterated concern of the general public. We emphasize the major stakes pertaining to the UFO question and the benefits that may arise from a policy of transparency.

The “Collectif d’Intervenants sur le Phénomène OVNI” (CIPO), in English, the Collective of Contributors on the UFO Phenomenon, consisting of around fifteen associations, study groups and specialized media as well as close to thirty independent researchers, is a civic initiative aiming to promote a serious, scientific and transparent response to the UFO phenomenon in France. Our demands are:

• For official organs or state services to declassify and preserve all archives concerning UFO and UAO phenomena in France.

• For scientific communities to initiate research on the topic and make them public.

• For independent French research in ufology to have better backing.

Atypical aerospace phenomena have been widely reported for several decades on all continents, including in Europe and in France, and have been constantly on the rise. A majority of them are ultimately explained by conventional causes, such as meteorological or astronomical phenomena or confusion with mundane flying devices (planes, helicopters, drones, sky lanterns, models, kites, rockets, etc.) At times the devices are less mundane, at others the reports are simply pranks.

However, a significant portion of the phenomena (called UFOs or UAPs) remain unexplained because they feature sizes, shapes and aerial capabilities that are radically incompatible with official aeronautical standards. The facts are documented with credible testimonies and reports from aerospace specialists like pilots, radar operators, meteorologists and astronomers. A non-exhaustive list of cases is included with this letter.

In some situations, the devices display aerial capabilities far beyond our current and conceivable technical know-how: extreme sizes or speeds, stationary flights followed by stupendous, instantaneous accelerations, breaking of the sound barrier without a sonic boom, acute angle turns, non-aerodynamic shapes without any signs of propulsion or fueling devices, electrical or electromagnetic disturbances, USOs…

From the multiple archives available in France and other nations, major cases show the concreteness of the problem in all physical environments and all territories. Statistical and historical analysis indicate an over-representation in polluted or very densely populated sites, or sites in the vicinity of nuclear installations.

Despite the factual elements we have touched upon, we regrettably find that the UFO phenomenon is not given attention adequate to the needs of the research in the corresponding field.

It is also to be noted that historical cases are rarely officially addressed. They are either downplayed or classified as confidential, secret or top secret. The sparse media outlets that broach the topic generally do so in a superficial or ironical manner (though some earnest and professional press articles on the subject are starting to appear in France. As a result, the overwhelming majority of UFO witnesses do not wish to make their testimony public.

The Stakes of the UFO Question

Incursions of unknown aircrafts in our airspaces obviously give rise to security concerns, even more so if these crafts possess outstanding evasive abilities. The hypothesis of revolutionary technologies developed by a foreign nation is not ruled out but has never been verified. This line of thought is also hampered by the repetitiveness of the phenomena observed worldwide over a period of 70 years. Similarly, psychosocial theories surmising that UFO sightings are attributable to influences from science-fiction, psychological conditions, hallucinations or mediatic contagions are not scientifically recognized and credible models for the purpose of explaining mass testimonies, physical traces on the ground, or radar and photographic data.

The scientific analysis of existing and declassifiable data reveals the benefits that a non-polluting technology capable of generating more energy than a nuclear plant in less space might have, as an alternative to the fossil fuels which have a devastating impact on Earth’s ecology.

Other perspectives, just as important, might be sketched here: “The extra-terrestrial hypothesis is by far the best scientific hypothesis: while it is not indeed categorically proven, there exist strong presumptions in its favour, and if it turns out to be exact, its consequences would be tremendous.” concludes the COMETA report, a paper published in 1999 by French generals and scientists. Indeed, in case of discovery or contact with exogenous intellects, the cultural, religious, philosophical and scientific implications would probably alter the face of the world. Notably, it would require an advanced reflexion on the nature of our reality, the role of conscience in the way it appears to us and possible links with the philosophical implications of Quantum Physics.

In spite of some public initiatives (creation of the GEPAN in 1977) or private ones (the COMETA and SIGMA reports) which have been acclaimed in their times, France presently remains marginal in its contribution to the progression of the UFO question. Some French media outlets have only just begun to touch on the subject in light of the surge of events in the USA. Technical debates are starting between intelligence specialists, aerospace professionals and scientists.

A major political inflexion is taking place in the USA since 2017. On a regular basis, pilots openly talk about UFO encounters during flight. The facts, confirmed by videos such as FLIR1, Gimbal, Go Fast and USS Omaha, as well as technical measurements, are officially recognized as unexplained by authorities like the US Navy and the Pentagon. Meanwhile, major American media (The New York Times, The Washington Post, Popular Mechanics, Fox News, CNN, CBS…) are engaging in thorough investigations leading to the conclusion that the phenomenon of UFOs is genuine. These initiatives are supported by prominent politicians like former Nevada Senator Harry Reid, the actual Senator of Florida and de facto President of Intelligence Committee Marco Rubio and John Ratcliffe, ex-head of National Intelligence, by important private groups (To the Star Academy of Arts & Science) and by the work of scientific study groups (Scientific Coalition for UAP Studies). In 2020, the American Senate voted the creation of a study cell on the unidentified aerial phenomena of the Pentagon (UAPTF), whose mission is to present an official report on the situation. We furthermore note that China is conducting advanced investigations on the UFO phenomenon, for example by supporting private ufology groups and through the use of extensive technical and astronomical tools.

Historically, government or military bodies, aerospace professionals or media who have acted in a transparent way have always received marks of respect, encouragement and congratulations.

All this represents an exceptional opportunity for you, decision makers, to promote at the level of the general public the reality of the UFO phenomenon, because our fellow citizens have a right to be informed in order to apprehend in the best conditions the change of paradigm tied to the fact that we are not alone in the Universe and thus enable them to better understand the world in which we live.

It would also be best if France did not fall behind in the new technological race taking place between the other major powers of our planet.

We thank you for the attention and favourable response you will give our application. Mr. President of the French Republic, please receive our most respectful regards,