1. Unknown craft came from the tree line pulsing multicolored lights. After a few seconds, two orbs came out of it and began to pulse/blink red. 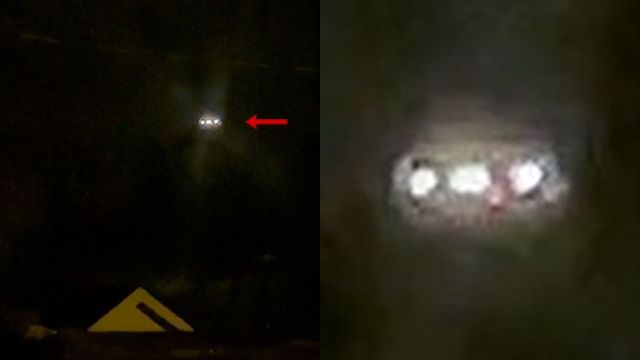 On December 26, Exopolitics US Army source, JP, was given a set of geographical coordinates from an unnamed Lt Colonel (USAF) who simply told him to publicly release them.  JP had seen the officer at a classified briefing he attended at a military base where he is currently stationed, where he was told about ancient ruins being found on Antarctica, the Moon, Mars, and elsewhere in our solar system.  These were being investigated in joint missions with various Earth nations, including China. The coordinates given to JP (72°31’12″S 3°36’26″W) appear to show a large building complex located about 150 miles (240 km) from the Antarctic coastline in Queen Maud Land.  This is an area that was claimed by Hitler’s Third Reich and where an Antarctic Colony, Base 211, was secretly established during World War 2.
A 1,200-meter-high monolith discovered on Mars. While other objects near the monolith are unrecognizable and blurred, this object is clearly present since a shadow on the monolith appears on opposite side from the sun. Therefore it seems unlikely that the monolith is the result of a digital image artifact, stitching error or glitch.  Google Mars coordinates: 31° 3’48.78″S 74°15’18.46″E
Looking at the famous Da Vinci, “The Last Supper” picture, mirroring and inverting the picture in the correct way, inverting it right down the middle you get a hidden image that is unbelievable. What is revealed is absolutely Jaw Dropping! The question is, what did Da Vinci Know that he is trying to reveal? Link: Photo’s “The Last Supper Wikipedia http://upload.wikimedia.org/wikipedia/commons/3/34/DaVinciCodeSolution.jpg Original http://dl.dropboxusercontent.com/u/3687918/the_original.jpg Mirror http://dl.dropboxusercontent.com/u/3687918/Mirror_aligned.png
Exopolitics Today: Dr. Michael Salla interviews Brad on how extraterrestrial life and black magic have been integral components of the global control system created millennia ago to subvert humanity, and has over the last 50 years prevented the emergence of a Star Trek Future.  As the Deep State unravels and cabal leaders escape Earth due increasing public resistance to their policy agenda and intervention by an alliance of positive extraterrestrial groups working with “White Hats” from different spacefaring nations (the ‘Earth Alliance’), it has been claimed that the magical keys and codes used to subjugate humanity, are being surrendered.  This interview discusses what would be involved in the handover of magical keys and codes used by the Cabal, and how this is necessary to bring about our Star Trek Future.